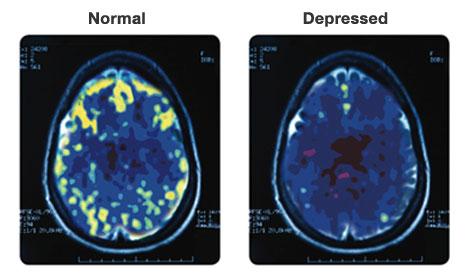 If your depression is persistent, or treatment-resistant, there is a physiological malfunction going on that needs to be addressed. It is not genetic or permanent or “just the way you are”. No, ask yourself how rational it is to hypothesize that inherited, pro-survival genes would set you up to essentially succumb to death. If depression was a prominent evolutionary trait, our predecessors would have died out long ago. Where is the adaptability or survival advantage in complete apathy, in profound despair, in the brain’s resilience shutting down? The intuitive regulation of evolution does not equate to an illness such as major depression.

I have found that many doctors, genetic determinists, and “skeptics” dismiss or even ridicule the idea that nutrition and cellular function are related to depression, or any “brain stress syndrome”, as Ray Peat termed them. There is a subset who admit “we don’t have all the answers yet” but can’t separate actual quackery from cutting-edge reality so dismiss all new ideas as “inconclusive” and thus not worth exploring anytime soon, at least not until their high priests bless such things with approval years or decades down the line. Peat counters the authoritarians but falls into his own traps. Andy Cutler’s work is more practical and concrete, though Peat remains admirable. Many of Cutler’s medical suggestions from his book, Amalgam Illness, laid the foundation for this article. Through Cutler, a sensible and glaringly obvious discovery as to my depression’s origin became possible (it is mercury poisoning, but we’ll get to that).

Curveball, use with caution, off-label use:

Any combination of these can turn things around drastically and quickly if you are lucky. I think these should be considered for all qualifiable, “biological depressives” who tolerate them with their medication, especially if the drug isn’t enough. *Rhodiola is the exception here, as it interacts with certain antidepressants like MAOIs, e.g. it did successfully augment my 10mg Parnate, but produced a negative reaction with 40mg Parnate. The cocktail can allow drugs to work better, or at all, for moderate depression or episodic major depression. From my own experience, “big guns” are needed for truly resistant major depression, or severe melancholic depression, or major atypical depression.

Proper nutrition is the deadlock co-factor in many depressions. Malnutrition, even if not initially obvious, can prevent recovery. Everyone has something different going on related to deficiencies. That cocktail may not clear up the “deadlock” for something with very specific deficiencies, so it’s important to assure daily adequate intake of macro and micronutrients across the board. Though, still, you may have malabsorption or a metabolic defect that will also prevent this from helping you.

To track nutritional intake, it’s a great idea to track your nutrient intake on Cronometer.com. You will see what you’re consuming and missing on a daily basis and this can guide you toward positive change. Here’s a relatively average day for me, and this is as I’m coming out of 9 months of major “clinical” depression.

The MAOI’s like Parnate are underused, effective, and safer than tricyclics and SSRIs. You apparently cannot eat certain foods while on them, like aged meats and cheeses, for risk of fatal hypertensive crises, but rebel psychiatrist, Ken Gillman of Psychotropical.com, criticizes, as he views it, a dramatic and outdated consensus. MAOIs do not have a horrific “discontinuation syndrome” as do SSRIs, they do not cause “apathy syndrome” as commonly do SSRIs.

At root, a lot of this nutritional distortion is caused by mercury poisoning. Most people with any chronic health symptoms probably have mercury, and if you do, the only safe way to cure it is to chelate using Andrew Hall Cutler’s Protocol. This takes a long time and is done on your own, cheaply. One day, I’ll add my success story to the long repertoire of others, but I’ve already experienced permanent gains thanks to it, though I am still generally ill.

It is up to you whether or not to trust and submit to glorified and ill-equipped technicians (doctors & practitioners), but if you learn what works, and what’s safe, and decide to take full charge of yourself and your life, you’ll be surprised at the possibilities, and maybe end up… happy.(?) (!!)

[Frivolous venting below. Not part of the treatment advice :)]

Of course, I am not advocating against finding a doctor. Use them for the function they serve, but to me, the roguish path of doing your own research and finding your own conclusions will greatly increase your chances of attaining an enjoyable life, instead of the hopeless opposite. No, it’s not this hard for everyone. Sometimes, you take Zoloft, it works, and that’s that. I am not this person, and this article is not written for that group, though I do wish them well. It is my journey, not theirs, to reluctantly venture on through this drawn-out, colossal, arduous, exhausting trek.

View all posts by Joe

This site uses Akismet to reduce spam. Learn how your comment data is processed.